Prof. Martine Rebetez, climatologist at the University of Neuchâtel

Prof. Jacques Dubochet, biologist at the University of Lausanne and Nobel laureate in Chemistry 2017.
The Grandparents for the Climate Switzerland (GPclim), together with the University of Lausanne (UNIL), organized a presentation/dialogue, calling upon all generations to take action for the climate, as the title of the event indicates. This was the first time that GPclim and the UNIL had collaborated in setting up this type of event. Both of the presenters gave separate, complementary talks on aspects of the climate crisis before entering into a dialogue with representatives from approximately a dozen climate groups comprised of members from younger generations.

Ms. Laurence Martin, co-president of GPclim moderated the introduction. Mr. Benoit Frund, Vice-Rector for Sustainable Development and Campus Affairs at UNIL, addressed the more than 450 participants who overfilled the auditorium. He lamented “there were no experts with degrees in transformation” that we could rely on; thus the importance of us all working and learning together. Another honored guest was Anne Mahrer, head of the association “KlimaSeniorinnen” (Senior women for the climate). This latter group has charged the Swiss Federal Government with neglecting senior women's health, which seems to be suffering more than men's, due to insufficient measures to cut CO2 emissions.

Prof. Rebetez concentrated mainly on the effects of rising CO2 levels in Switzerland. What is remarkable is that Switzerland is warming almost twice as rapidly as the global average. This means that a rise in temperature of 2 degrees globally will see a 3.5 degree rise in Switzerland. The number of days with temperatures of 30 degrees C will increase as well if the temperatures continue to rise. The negative impact on the health of the population is the most worrying result. In addition, the Alpine landscape in Switzerland is manifesting concrete changes. The glaciers are melting; a decrease in the number of days with freezing temperatures at higher altitudes is changing the vegetation, the older trees in the forest are dying. The noticeable lack of rain (the summer 2018 was extremely dry) is linked to higher risks of flooding and especially landslides on the slopes. It is particularly worth noting that there is less snow at all altitudes in Switzerland. It is obvious that the skiing industry is suffering, with a loss of 40-80 days of snow cover as temperatures continue to increase. Nevertheless, Prof. Rebetez concluded that de-carbonization is the future in sectors as varied as building construction, transport, agriculture, industrial production and finance. Our social and political values must change to enable this necessary development.

Prof. Dubochet made the point that “we are good at producing knowledge but bad at applying it for human welfare”. In view of the picture given above, it is clear that we need to act quickly. But is this possible? Prof. Dubochet gave two examples of radical changes:

He ended by stressing the point that we need a strong movement, perhaps similar to the one in 1968, which would shake up our politicians.

Following the presentations, the youth groups for climate action introduced themselves and asked one question each. These in turn were answered by the presenters. Some of the concerns expressed were the slow pace of change and mobilization of the population. There was unanimity in the absolute necessity to change social values, to “live a happy, modest life style”. The use of violence to achieve climate goals was strongly rejected; on the other hand, the enormous power of the consumer was underlined.

A poster session was held in the foyer, allowing the representatives from various climate groups to discuss their projects with the public. This informal exchange took place with drinks and snacks in hand.

For more information (in French), I urge you to visit our website www.gpclimat.ch and to watch the video of the whole event. I also recommend you to read the excellent resume written by Dr. Jean Martin, a member of the scientific committee. 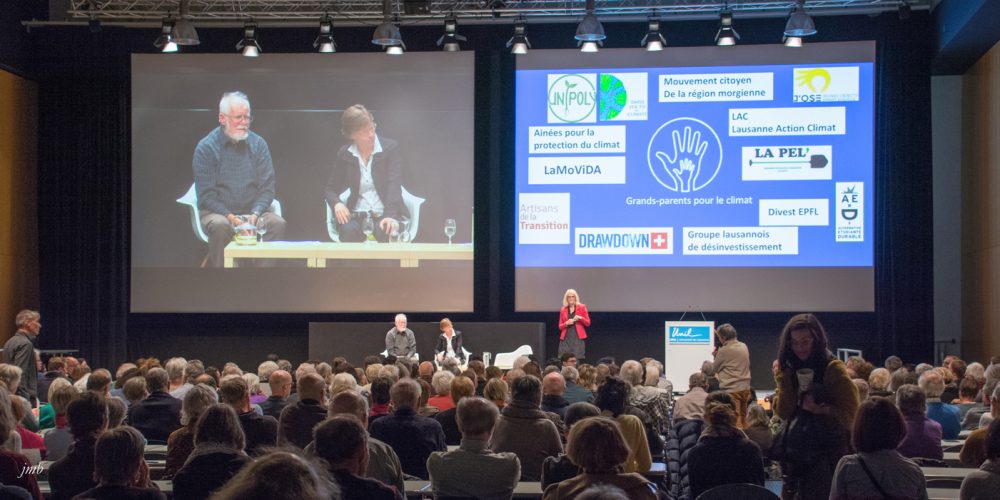